When I first saw the Sleep Sheep, manufactured by CloudB, I thought it was a wonderful idea! I soon started recommending it to everyone I knew who was having a baby, included it as a recommended product on my website, and gifted one at every baby shower I went to. 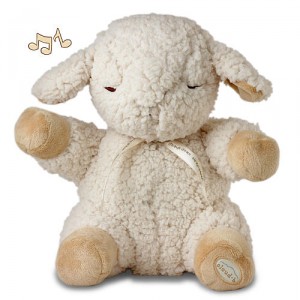 The Sleep Sheep is a stuffed animal “sheep” (also comes as a giraffe, monkey, turtle, Minnie Mouse, and more) that is stuffed with a sound box. The sound box plays 4 soothing sounds to help babies, and children, relax and calm. The sounds differ between product but may include rain, stream, ocean, mothers heartbeat, and whale sounds. The sound box has a volume control as well as a timer of either 23 or 45 minutes to help save battery. The Sleep Sheep comes as a full size sheep that can be hung on the crib, as stuffed animals are not recommended in the crib, or as as a smaller on-the-go size.

The newest model of the Sleep Sheep is the Sleep Sheep Smart Sensor. (The one with the nightcap on.) I was so excited when I saw this version come on the market because I was already a fan of the Sleep Sheep and was intrigued by this wonderful concept. The idea is that there is a sensor on the sound box that turns the soothing sound back on when the baby stirs or startles to help him go back to sleep. 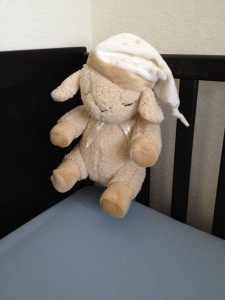 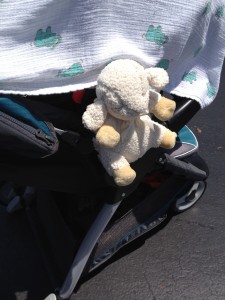 Unfortunately the sensor on the Sleep Sheep Smart Sensor does not perform as claimed. When I tried the first one and realized that the sound box did not turn back on I quickly returned it to the store for a new one. When that one did not work either I contacted the manufacturer CloudB. They sent me a replacement box which also did not work. They continued to send me replacement boxes and to date I have tried 5 different ones and not one of them works as it’s supposed to. Some of the boxes would turn back on if I made a loud bang like closing a door loudly but not if the baby cried or even kicked his feet in the crib. Although it is supposed to play the same sound that was previously playing one of the boxes I tried would usually default to the heartbeat sound. Some of the boxes would never turn back on. One actually played lullabies instead of the soothing sound, which is funny since it’s not even marketed to do so. So while it is a great concept, and I really wished it worked, I have yet to see it function correctly.

I would like to make another point about the Sleep Sheep. There has been talk lately in the news and you may have seen this article by NPR: http://www.npr.org/blogs/health/2014/03/03/283972897/noise-machines-to-help-babies-sleep-can-raise-quite-a-din about the sound levels of some infant toys. The latest concern is that some sound toys, including infant sleep machines, may be harmful for babies hearing. Well being a music therapist and a concerned mom I immediately tested the Sleep Sheep to see if it was safe for my baby, and searched for guidelines for safe sound levels for babies. As a Neonatal Intensive Care Unit Music Therapist I was familiar with the safe sound levels for premature infants in the NICU. However, I found it difficult to find research on safe sound levels for full term babies. While I won’t go into great depth about safe sound levels here I will say that for me I was concerned with 1) the decibel level and 2) the length of time the sound was emitted. First, I tested each of the sounds, at full volume, with the decibel meter 2 inches away and found the ocean sound to go to 85 dBA and the rain to go to 87dBA. TOO LOUD! Second, the Sleep Sheep has a timer on it which allows it to only play for 23 or 45 minutes at a time. So when I use the Sleep Sheep I keep the volume low, keep it at away from the baby’s head, and use the timer to ensure that it helps him calm but then goes off for silence.

So the bottom line to my review is:

2 thoughts on “Sleep Sheep: A Review”