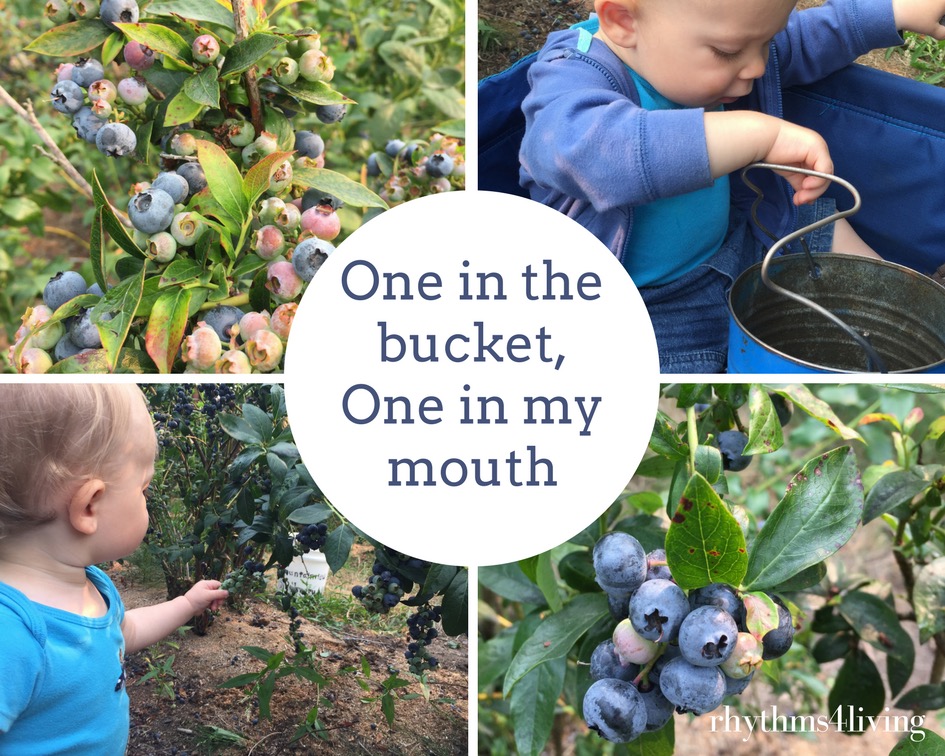 One of our favorite family activities is going blueberry picking. We discovered the many u-pick farms around our area last summer and were immediately hooked. We pick strawberries in June and blueberries in July and August here.

Our favorite farm is a local one called Mountainview Blueberry Farm. We each grab a bucket, throw the little one in the wagon, don hats and sunglasses, and head into one of many rows of blueberry bushes as tall as us. 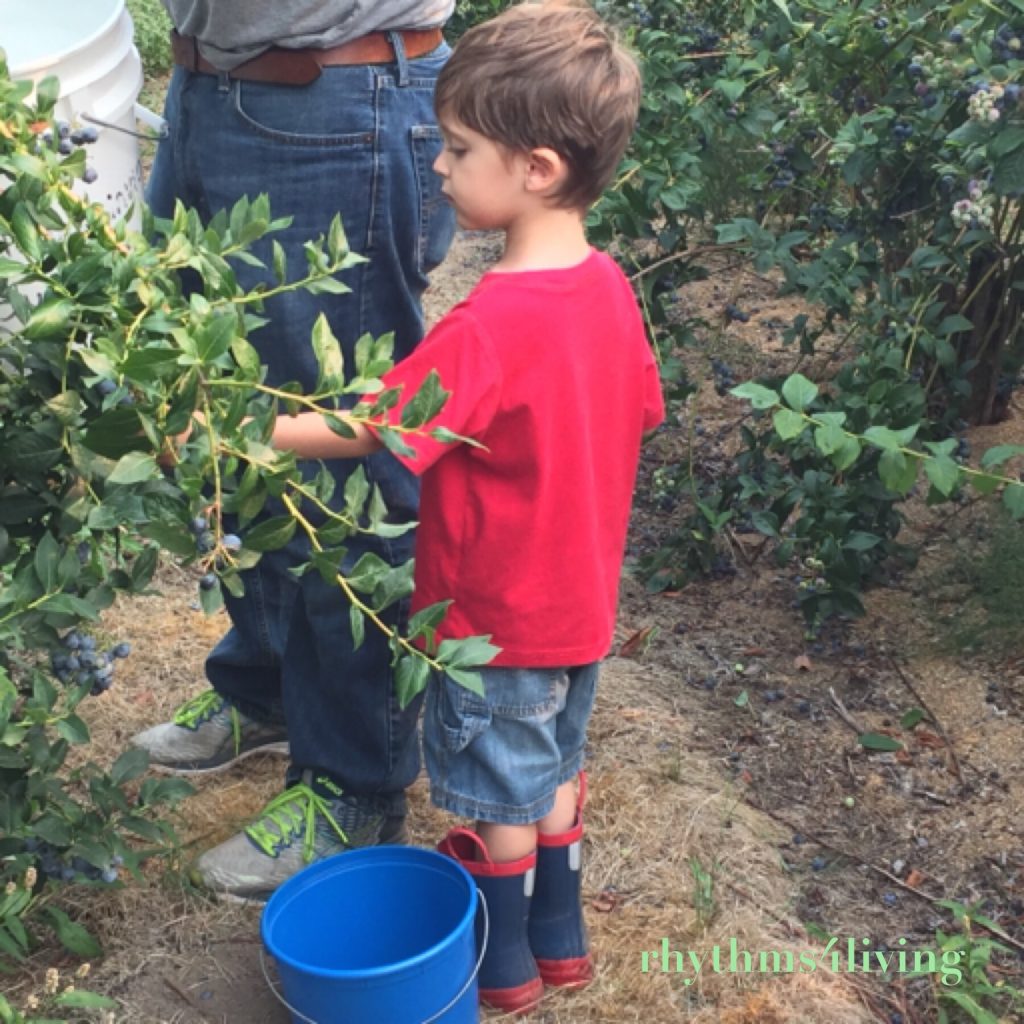 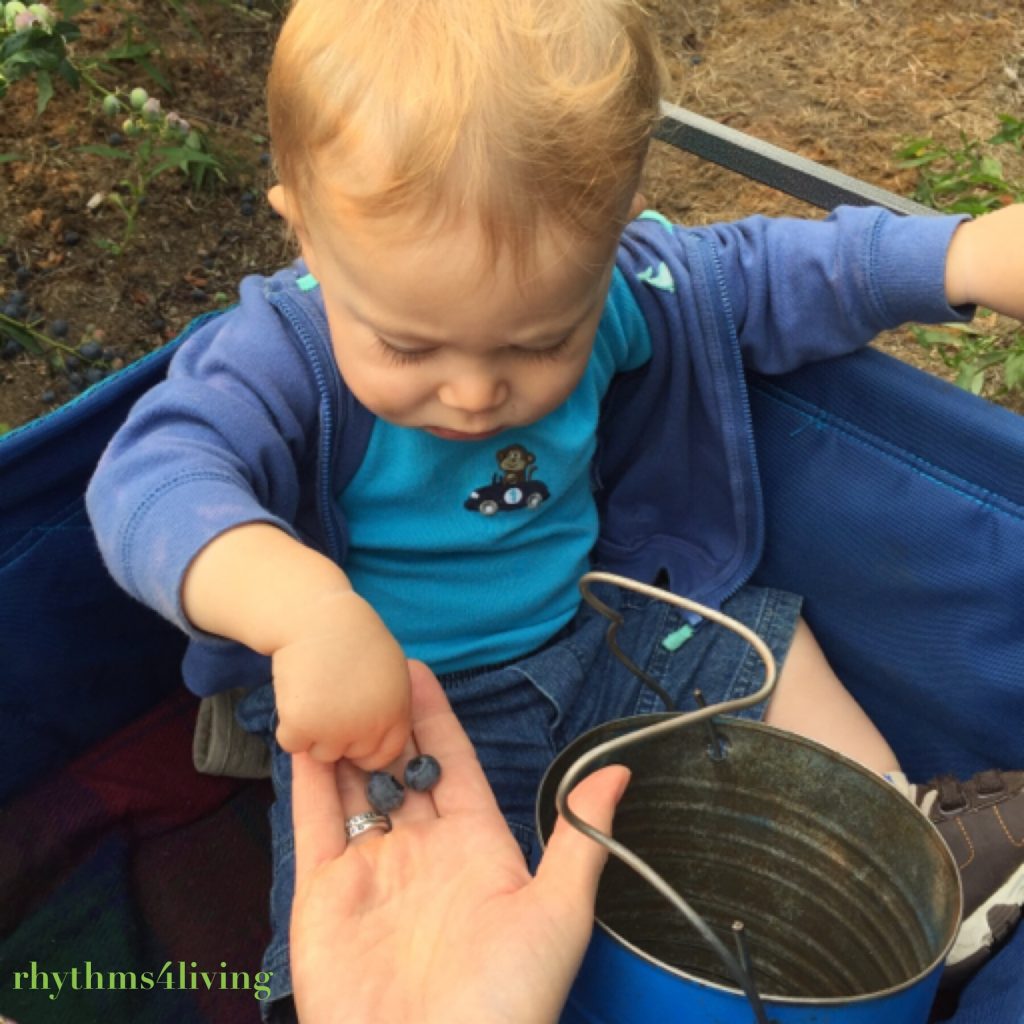 This year our youngest son had his first opportunity to try picking blueberries. He wasn’t very successful in picking them but he did like putting them from my hand into the bucket. All was fine until he grabbed the bucket and dumped it out all over the ground. From then on he was encouraged to find sticks and dig in the dirt! 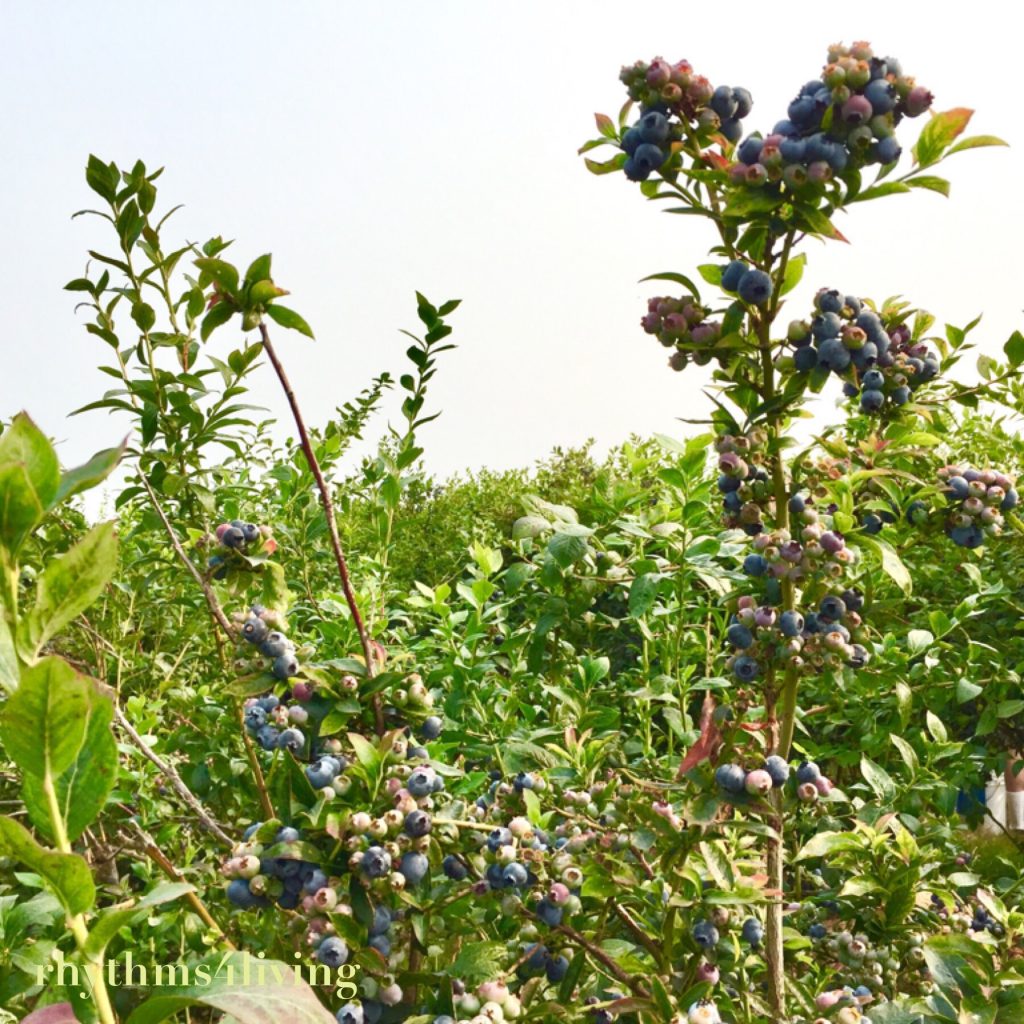 I especially enjoy the quiet that nature brings. It is so peaceful and enjoyable being outdoors as a family, breathing the fresh air, feeling the warmth of the sun and the cool of the breeze; feeling the earth firmly below, the expanse of the sky above, and the beautiful green and blue of the berry bushes. The only sounds are the kerplunk of the berries in the bucket, the gentle murmur of other families close by, and the buzz of an occasional plane overhead.

Summer days can get quite hot as the sun beats down so I recommend going earlier in the morning or later in the afternoon and be sure to grab a wide brimmed hat. Sunscreen, sunglasses, and drinking water are good too. Plan for at least 45 minutes for a good amount of berries. 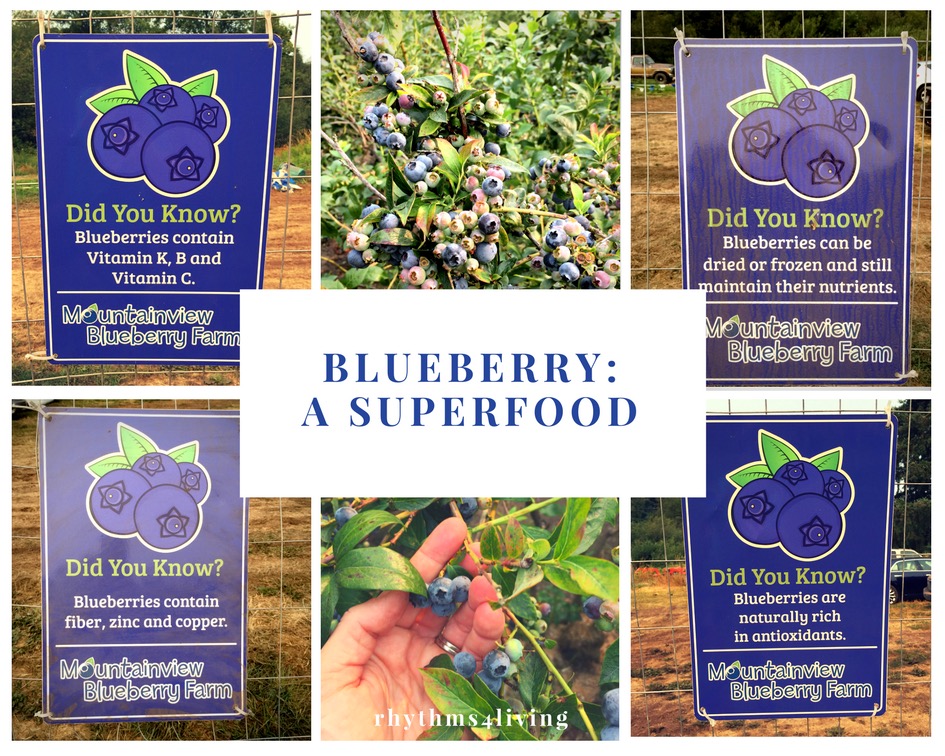 Blueberries are a superfood in my opinion. They are full of vitamins and antioxidants. They are great fresh or frozen, in baked goods, cereal, oatmeal, pancakes, or salad. We will easily eat up the majority that we pick in a week and will freeze some for later. The kids even like eating them frozen later on as a fun snack. 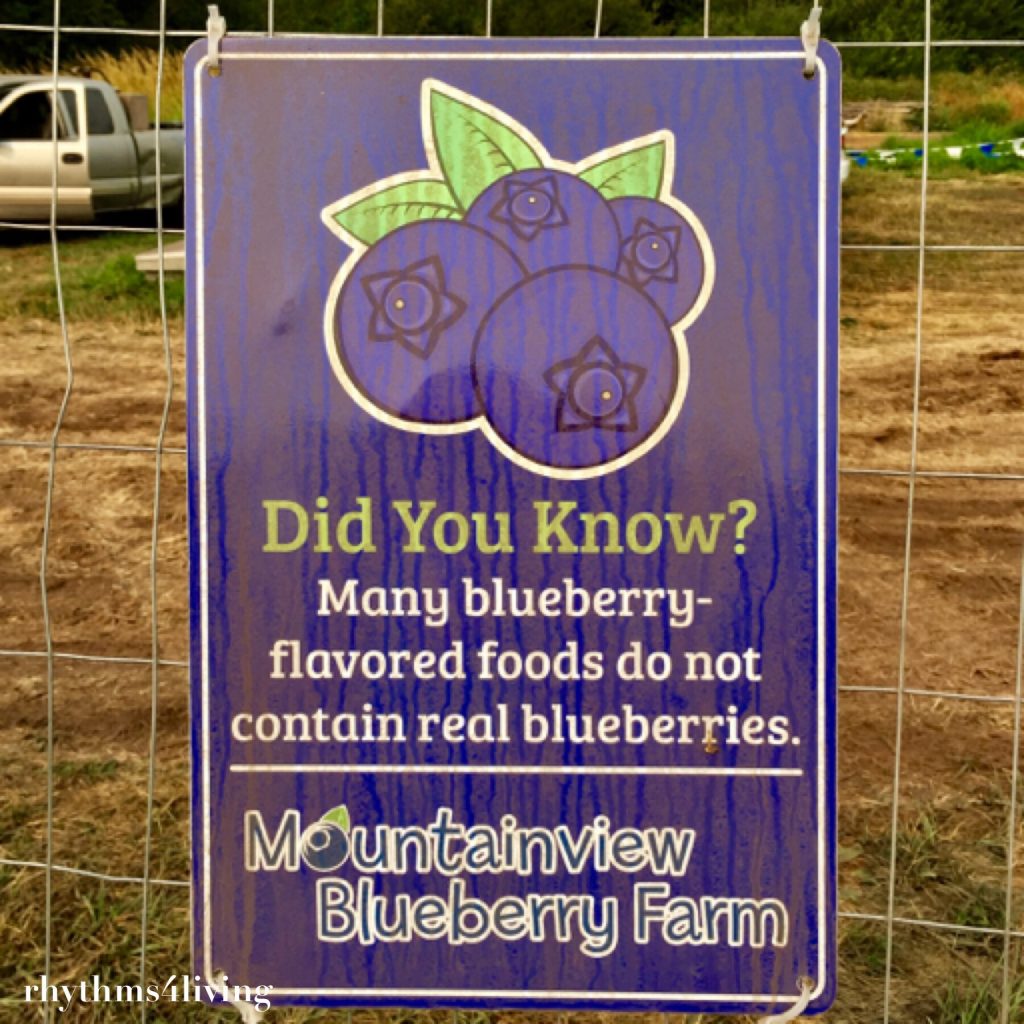 A word of caution: when purchasing blueberry items at restaurants, bakeries, or grocery stores keep in mind that a lot of items do not use real blueberries in them. I have always been sensitive to the smell and taste of the imitation blueberries. My son loves blueberry muffins and often gets one when we are out. I have always been turned off to the smell and taste. Make sure to get items made with real blueberries for the best health benefit. (And taste too!) 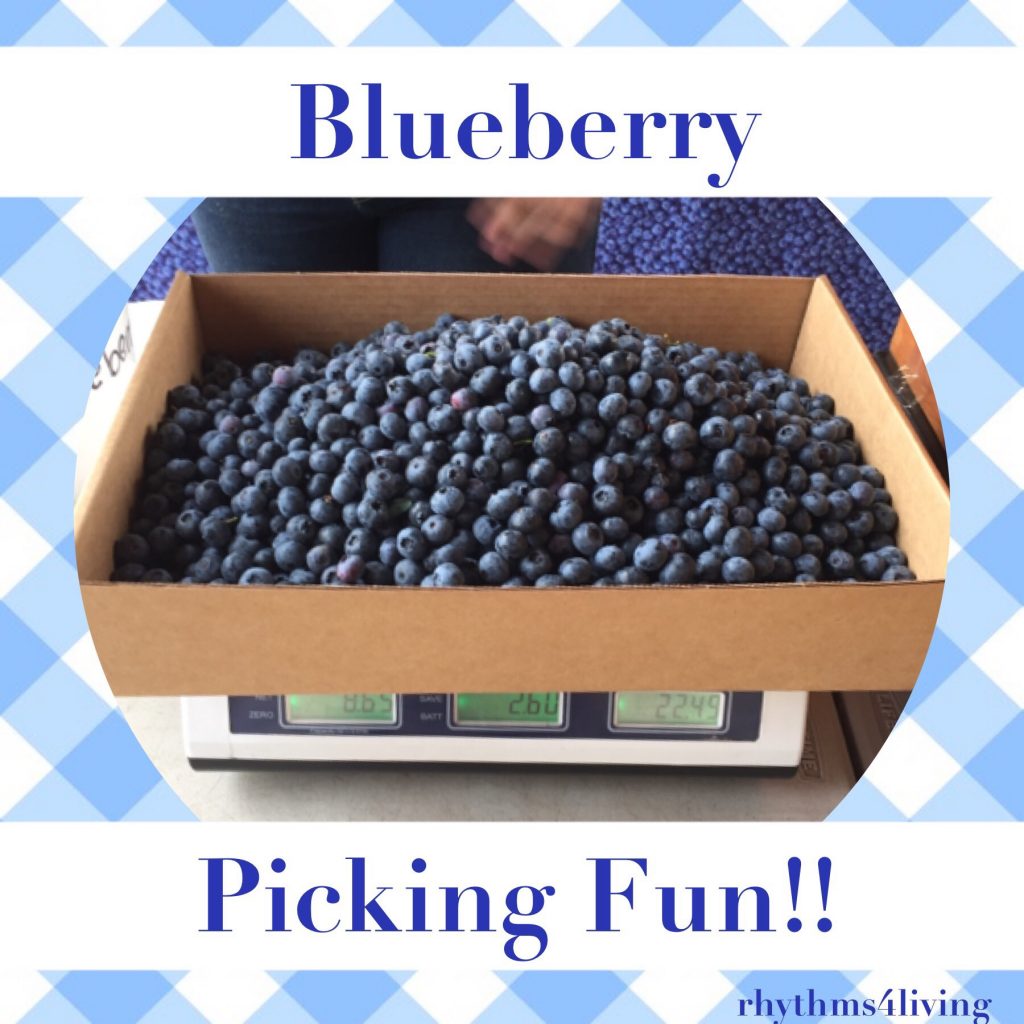 If you haven’t experienced a family outing of berry picking I highly recommend it. You are sure to feel refilled after bonding with your family in nature. Bonus: yummy berries to snack on for days…or months if you freeze some.

Have you tried berry picking? What are your favorite memories? Best tips? Favorite baked goods with blueberries? Share in the comments!

2 thoughts on “One in the bucket, One in my mouth”